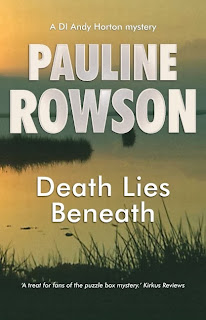 DEATH LIES BENEATH is number 8 in the Detective Inspector Andy Horton series of police procedural mysteries (14). It is set in June, so I thought it appropriate to feature it here on my blog this month. Like most of my crime novels it is inspired by locations in the area where I live and where the novels are set, Portsmouth and the Isle of Wight. It is also inspired by topical crimes. In this case, metal thefts, fraud, salvage operations and more.

It is available in paperback, as an e book, on Amazon Kindle and on Kobo and also as an unabridged audio book narrated by Gordon Griffin.

When ex con, Daryl Woodley is found dead on the marshes bordering Langstone Harbour the Intelligence Directorate believe his murder is linked to big time crook Marty Stapleton currently serving time in prison. DI Horton is not so sure. He attends Woodley’s funeral in the hope it will give them a lead in an investigation that has drawn a blank at every turn. It does but not in the way he or anyone expected. A body is found on a rotting boat being salvaged in Portsmouth Harbour throws Horton into a complex and frustrating investigation. As the tension mounts to solve the case, Horton receives a chilling message; time, it seems, is also running out for him personally…

"A fast paced excellent mystery, with an interesting diverse set of characters, and an intriguing hook at the end that has me eagerly awaiting the next instalment in this series. Highly recommended." Mystery People

Page One of DEATH LIES BENEATH

‘Anything?’ Detective Superintendent Uckfield asked hopefully.
Inspector Andy Horton shook his head and pulled at his black tie. Loosening his collar, he stepped into the shade of a tree in the crematorium gardens hoping to find some relief from the burning sun and wondering what Uckfield, head of the Major Crime Team, and Detective Chief Superintendent Sawyer of the Intelligence Directorate had expected they’d gain by a police presence – a weeping confession from the killer of Daryl Woodley over his coffin? That would have been nice but Horton knew that Woodley’s handful of mourners would sooner have their private parts tattooed with a blunt and dirty instrument than confess to a crime. And grassing to the police was only one step below being a paedophile in their code. They’d got nothing out of them during the investigation into Woodley’s death and they’d get nothing now. And neither would the crime reporter from the local newspaper, Leanne Payne, he thought watching her slim figure move amongst the mourners as they stood blinking in the bright sunshine like miners released from deep underground.
She addressed a shaven-headed, skinny man with tattoos up his hairy arms. Reggie Thomas, like Daryl Woodley, had been released from Parkhurst Prison on the Isle of Wight in March. When questioned, Reggie claimed to have no knowledge of why his former fellow inmate had been assaulted just off the Portsmouth waterfront eighteen days ago, or why, after three days in hospital, Woodley had risen from his bed and somehow ended up dead at the marshes to the north of the city three miles from the hospital. No one claimed to have driven him there, it was inaccessible by public transport and he could hardly have walked that distance.

Read more of Death Lies Beneath on Amazon

Available in paperback and as an ebook, on Amazon Kindle and Kobo and as an unabridged audio book. Also available for loan from UK, USA and Commonwealth libraries