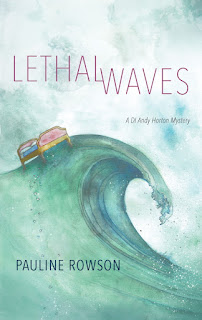 Harlequin Books USA, who are to publish in February 2020 the mass market direct to consumer paperback of my Inspector Andy Horton crime novel LETHAL WAVES, has unveiled the American cover for the mystery novel.

LETHAL WAVES is number thirteen in the DI Andy Horton mystery series of currently fourteen and is already published in the UK in paperback and as an e book, on Amazon Kindle and Kobo.

It is the second in the DI Andy Horton series to be published by Harlequin USA with the first being, FATAL CATCH.

In LETHAL WAVES, Inspector Andy Horton’s meal with his old friend, Inspector John Guilbert of the States of Guernsey Police, is cut short when a woman is found dead in her cabin on the ferry from Portsmouth to Guernsey. There doesn’t appear to be any suspicious circumstances. It's not Horton's case. But as  soon as Horton returns to Portsmouth he's called in to investigate the death of a vagrant found lying partially covered under a rotting houseboat. This time, it’s clearly murder.  Troubled by the many unanswered questions surrounding both deaths, Horton must call upon all his skills and intuition to solve a complex case, uncovering dark secrets that have led to such lethal waves of destruction.

The Inspector Andy Horton crime series, set against the atmospheric backdrop of the sea in the Solent area of England in Portsmouth and the Isle of Wight, has been hailed in UK, USA and Commonwealth as "exemplary," "multi-layered" and "cleverly plotted" with reviewer, Booklist, claiming that Andy Horton is an "especially good series hero, a likeable fellow with plenty of street smarts and the requisite personal baggage"

Inspector Andy Horton is a man very much defined by a tormented past spent primarily in care when his mother disappeared when he was ten. He is an instinctive copper rather than an intellectual one, tough and resilient, but deeply empathetic. His dry sense of humour is the key to his investigative approach. It’s how he keeps people at arm’s length and stays detached from the crimes he investigates. His greatest strength is his ability to put himself in a victim’s shoes, to imagine events from their perspective (even the moments up to their death), making leaps of deduction few would be able to. And he’s most often right.

Harlequin (Harlequin.com) is one of the world’s leading publishers of books with titles issued worldwide in as many as 32 languages and sold in up to 93 international markets. The company publishes more than 110 titles monthly and more than 1,300 authors from around the world. Harlequin is a division of HarperCollins Publishers, itself a subsidiary of News Corp and one of the largest consumer book publishers in the world. Harlequin has offices in 14 countries, including offices in Toronto and New York.

Harlequin published FATAL CATCH, number twelve in the DI Horton mystery series the USA in 2018. It is also published in the UK in paperback and as an ebook, on Kindle and Kobo.


DI Horton is called out to examine a gruesome catch by two fishermen: a human hand. Soon he finds himself immersed in a complex case where everyone has a reason to lie and no one is who they seem. Trust no one, believe nothing….


"A great read for mystery lovers with plenty to keep you guessing until the last moment." Crime Book Club