For fans of 1950 set mysteries - Inspector Ryga - 'A great read and one I recommend to any crime fans.' 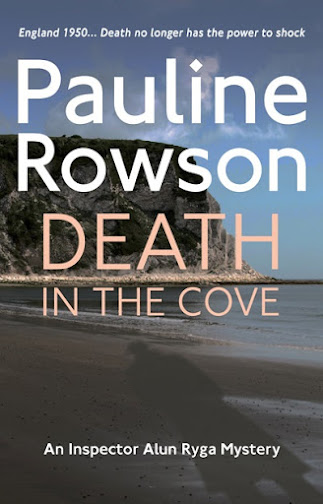 DEATH IN THE COVE, introducing Inspector Alun Ryga of Scotland Yard
England 1950, a country still struggling to come to terms with peace in the grip of austerity and rationing.

'A great read and one I recommend to any crime fans.' BH Living Magazine

Ryga is a former German prisoner-of-war. His ship was seized by a German Raider in 1941 as a result of which he spent the rest of the  war incarcerated in MILAG, (Marine Internierten Lager).  Here he had to learn how to cope with the uncertainty, fear and deprivations of forced incarceration with no option but to wait, hope and pray that the war would soon be over and the Nazis would be defeated.

His experience has made Ryga observant, analytical and reflective.  It has also given him insights into his fellow man.  He’s witnessed compassion, cruelty, cowardice and heroism, mental breakdown and despair. He’s made a promise to himself that whatever happens after the war he’ll keep an open mind and never judge.

His experience at sea, and as a prisoner-of-war, have made him unique in his approach to solving coastal based crimes.

'The clues are there, but I followed the red herring and didn’t guess the murderer.  Will you?  Don’t miss this first book in what is sure to be a first-class series. Whilst the murderer is unmasked there are left some tempting hooks for the next book.  Highly recommended.' Mystery People Magazine

"I enjoyed this book. The setting was interesting because it happens about 5 years after WW II. It was fascinating to learn about the rationing and human toll that still lingered that many years after the war.I would recommend it for lovers of mysteries without gory details,a solid police procedural with interesting characters. The ending was a twist I didn't see coming." Audible

DEATH IN THE COVE published in paperback, as an ebook, on Amazon Kindle, Kobo, Apple and Google Books.