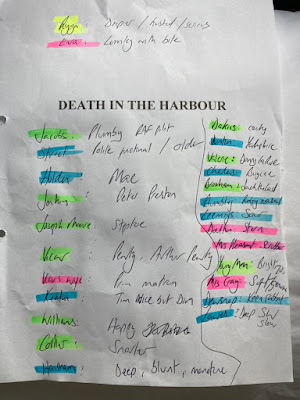 This is a fascinating insight of the narrator's audio script character summaries for recording the audio book of my Inspector Ryga 1950 set mystery (2) DEATH IN THE HARBOUR just released in paperback, as an ebook on Amazon Kindle and as an audio book. Narrated by the very talented actor, Jonathan Rhodes and produced by B7 Media.  See how he sums up in one or two words the various characters in the novel. Joseph Moore - Steptoe; Leemings -Sour; Dewsnap - keen rabbit!

Writers see and hear their characters in their heads as they are creating them and without any prompting from me Jonathan Rhodes has brought these characters to life just as I have written them. His notes describe them perfectly.

I'm so proud and delighted with the result and I am sure listeners of the audio book DEATH IN THE HARBOUR will delight in hearing all the various characters in the new Inspector Ryga mystery, including of course, Ryga himself and his companion former war photographer Eva Paisley whom Jonathan describes as "Limley with bite" Perfect.

England 1950, a country still struggling to come to terms with peace in the grip of austerity and rationing.  Scotland Yard's Inspector Alun Ryga is sent to Newhaven, East Sussex to unravel the mystery of why an ordinary police constable was murdered and his wife has gone missing

Published in paperback, as an e book, Amazon Kindle