DEATH IN THE COVE, a gripping murder mystery with lots of twists and turns 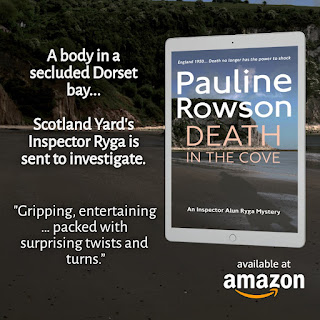 "For lovers of mysteries without gory details. Brings the atmosphere and era alive."

England 1950, struggling to come to terms with peace in the grip of austerity and rationing. The body of a man in a pinstriped suit is found in a secluded bay on Portland Island, Dorset. Scotland Yard's Inspector Ryga is sent to investigate.

Recently promoted, Ryga, is on his first solo investigation outside of London, and is keen to prove his worth. Ignoring the warnings of the local police inspector, and the Dorset Chief Constable, that his trust in Eva Paisley, a former war photographer who discovered the body, is misjudged, Ryga quickly realises that her observations could provide the breakthrough he needs in a complex murder investigation and the answer to the haunting circumstances that have sent the man in the pinstriped suit to his death.


“Ryga studied the face of the dead man with interest. Death no longer had the power to shock him. He’d seen too much of it. That didn’t mean he didn’t feel sorrow, pity, anger or despair, or sometimes all four emotions and in such a swift succession that they became one. This time he felt none of these, only professional curiosity.”

From the author of the fast-paced, gripping DI Andy Horton novels and the action-packed Art Marvik mystery thrillers .

"Pauline Rowson is one of my favourite authors, her books are always well plotted with decent characters who you can identity with" Soulboy


"Lots of twists and turns to keep you guessing. Kept me enthralled to the final chapter." Julia