What's on in November for crime author Pauline Rowson

A talk and the performance of my 1940's set murder mystery play, MURDER AT THE PELICAN CLUB is on the cards for November along with the sale of DI Andy Horton crime novel DEAD PASSAGE, number fourteen and the latest in the series, in paperback and as an ebook. In addition, FATAL CATCH, number twelve in the DI Andy Horton series is also now on sale in mass market paperback in the USA and Canada.

On the 21st of November I will be entertaining members of Eastleigh U3A with a talk on the secrets of successful crime writing and showing how I plot and research my crime novels and how I create the characters. 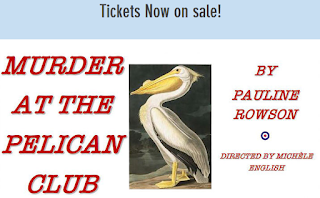 My 1940 set murder mystery play, MURDER AT THE PELICAN CLUB is to be performed by the Winterbourne Players, Bristol, England from 22 to 24 November 2018.  This brand new detective play, Murder At The Pelican Club, is an exciting 1940s murder mystery in the vein of the classic crime thrillers of the 20th century, an Agatha Christie style detective drama that has audiences guessing ‘who done it.’ Written in a serious vein but with a touch of humour, the play takes place in the Pelican Nightclub and Restaurant in November 1940.

Tickets cost £3.00 for patrons and £10 for non-patrons, includes supper, music and show!

Tickets now on sale. Don't miss your chance to become a super sleuth!

My Inspector Andy Horton crime novel Fatal Catch is now published in mass market paperback worldwide by Harlequin Books USA. It was first published in the USA in paperback on 1st September 2018 and was exclusively on sale to Harlequin Book Club members only but from 1 November it is now available in America and Canada for general sale.

Fatal Catch is number twelve in the DI Andy Horton police procedural crime series of which there are currently fourteen.

DI Andy Horton is called out to examine a gruesome catch by two fishermen: a human hand.Is it that of missing violent criminal Alfie Wright – or is he the killer? And where is the rest of the corpse? Soon Horton finds himself immersed in a complex case where everyone has a reason to lie and no one is who they seem. Assailed by doubts both in his personal and professional life, Horton desperately tries to keep his emotional feelings under control and his focus on his work. His instincts tell him to trust no one and believe nothing; he’s not sure though whether this time he’ll succeed …

And last but by no means least....


Detective Inspector Andy Horton receives a mysterious telephone call from Adele Goldsby, the daughter of a dead Portsmouth politician, with an urgent request to meet her on the Isle of Wight ferry because she has something to reveal about her father’s death twelve years ago. When she doesn’t show, Horton is at first inclined to think it was a hoax until more information comes to light. As he unofficially looks into the circumstances surrounding the politician’s death he becomes more convinced that the initial investigation was cursory to say the least, a fact that is borne out by Sergeant Cantelli who was on the case. With increasing concerns over the continued silence from Adele Goldsby and as new evidence is unearthed connected to a long ago killing, Horton believes the politician was murdered. Now all he has to do is convince his bosses.

Taken all round November looks set to be an exciting and busy month.