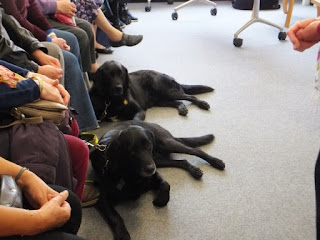 Two special guests attended my talk at Fareham Library on 17 May as part of the Crime Writers' Association National Crime Reading Month. I was joined by two Guide Dogs for the blind (and their owners) and the dogs listened attentively as I talked about my crime novels and myr crime busting fictional heroes, the flawed and rugged DI Andy Horton, my undercover investigator, Art Marvik a former Royal Marine Commando and my new 1950 detective, Inspector Alun Ryga who sees his debut investigation in September 2019 with a baffling crime on Portland Island, Dorset. Perhaps I've recruited two new fans!


I explained how locations along the south coast of England provide the inspiration for my crime novels  of which there are now nineteen and how I turn these ideas into her multi-layered and gripping plots. I also talked about how I develop plot lines by creating a storyboard; how I create characters using spider-grams and how I research the police procedure and the forensic aspects of my crime novels.


Following my talk there was a lively question and answer session and a book signing. It was a pleasure to talk to the lovely audience at Fareham Library.

There are fourteen in the Inspector Andy Horton police procedural series set in Portsmouth and the Isle of Wight; three Art Marvik mystery thrillers  set along the south coast including the Jurassic coast of Dorset and the Downs of East Sussex, Beachy Head and Cuckmere Haven; and two standalone thrillers. 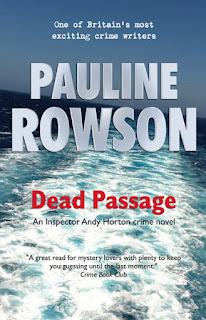 Dead Passage is the latest Inspector Andy Horton mystery to be published, number 14 in the series. available in paperback, as an ebook, on Amazon Kindle and Kobo 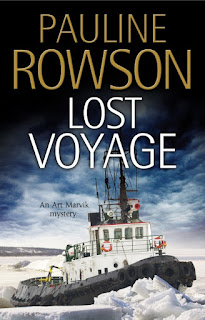 Lost Voyage is the latest Art Marvik mystery thriller, number 3 in the series.


My next crime to be published in September 2019 is the first in a brand new series set in 1950 England introducing Scotland Yard detective, Inspector Alun Ryga who is called up to solve coastal crimes. DEATH IN THE COVE is set on Portland Island, Dorset.

Death in the Cove will be published in paperback, as an e book, on Amazon Kindle and on Kobo and as an audio book on 26 September 2019.