What's on in October 2019 for crime writer Pauline Rowson

The BIG news for October is that my latest crime novel, DEATH IN THE COVE is now on sale and for loan in libraries.  It was published in paperback, ebook, Kindle, Kobo and as an audio book on 26 September.  It is the first in a 1950 set series featuring Inspector Alun Ryga with number two in the series to be published in 2020.

Whoever would have thought I would have written and had published twenty crime novels and in the space of thirteen years, certainly not me after many years of rejections. My first crime novel TIDE OF DEATH, introduced DI Andy Horton in 2006, this was followed by two stand alone mystery thrillers, In COLD DAYLIGHT and IN FOR THE KILL before DI Andy Horton took off and now has 14 mysteries behind him. I've also written three in the Art Marvik mystery thriller series. Marvik, freshly out of the Royal Marines, embarks on a career as an undercover investigator for the UK's National Intelligence Marine Squad (NIMS).

With DEATH IN THE COVE I have returned to where I started writing, which was historical fiction, none of which have ever been published. I found that while writing those historical novels a crime element kept creeping in, so here I am full circle now enjoying writing historical crime fiction. DEATH IN THE COVE introduces Scotland Yard detective, Inspector Alun Ryga who is sent to solve a baffling crime on the south coast of England.  In this first mystery it is the case of why a man wearing a pin striped suit has ended up murdered in a secluded bay on the Island of Portland, Dorset.

Throughout October there will be articles on my website about the story behind DEATH IN THE COVE and how 1950s policing and society in Britain differs from today. 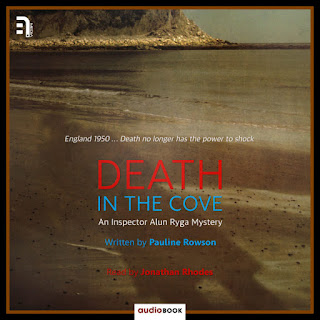 My talks in October

Also in October I will be putting the finishing touches to Inspector Ryga number two and giving two talks, one of which is at Lockswood Library, Locksheath, Hampshire. See details below.

14 October 2019 St Anne's Fellowship, Calmore, Southampton 2pm
I'll be talking about how I plot, write and research my crime novels

I'm sure there will be other things that will crop up in October, which will be announced here. You can also subscribe to my monthly newsletter to be kept up to date with all my latest book news, articles and events.