If crime and mystery novels are your cup of tea  then there are fourteen to choose from in the DI Andy Horton series; three Art Marvik mystery thrillers and if you fancy stepping back to 1950 England, then why not help Scotland Yard detective, Inspector Alun Ryga investigate a baffling case on the Island of Portland Dorset in DEATH IN THE COVE.

Below are the DI Andy Horton novels in order, the Art Marvik mysteries in order and these and DEATH IN THE COVE are available in paperback, ebook, on Amazon Kindle and Kobo and some as audio books.  Happy Reading. 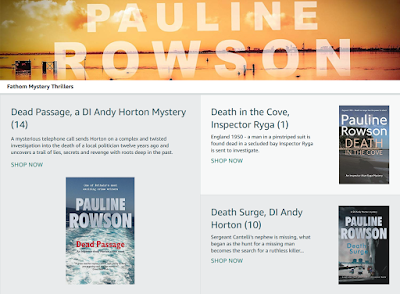 The DI Andy Horton novels in order then with the first in the series listed at the top, are:

If you enjoy the Inspector Andy Horton crime novels you might like the crime novels featuring former Royal Marine Commando Art Marvik, now working as an undercover investigator for the UK's National Intelligence Marine Squad

The second Inspector Ryga mystery is to be published in 2020

Plenty to chose from.