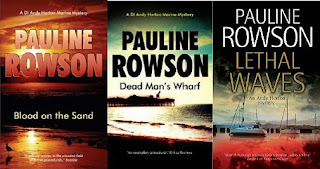 Three of my crime novels featuring the rugged and flawed Portsmouth detective, Inspector Andy Horton, are set during the month of January, Dead Man's Wharf, Blood on the Sand and Lethal Waves.

Here is a taste of  what's in store for DI Andy Horton in each of them.


Dead Man's Wharf the fourth in the DI Andy Horton crime series by Pauline RowsonTV diving personality Nicholas Farnsworth's life is threatened...
A deranged elderly lady in a nursing home claims she's been attacked by an intruder... A mother's conviction that her son's death on Christmas Eve was no accident...are the incidents related? Horton believes not but soon he's caught up in a complex investigation with far-reaching international implications.


Blood on the Sand, the fith in the DI Andy Horton series by Pauline RowsonA cold grey January morning, a woman with a gun in her hand - a corpse on an abandoned golf course. Is she a killer? Horton doesn't think so. Soon he's uncovering a web of intrigue that ripples down the years and which someone is determined should never be revealed.


Lethal Waves, an Andy Horton Marine Mystery by Pauline Rowson On his return from Guernsey, Horton is called out to investigate the death of a vagrant whose body is found under a rotting houseboat on the shores of Portsmouth.

"Nothing in this police procedural is as it first appears. The Harley Davidson–riding, boat-dwelling Horton is a fascinating man to get to know, and his thoughtful approach to detection is a pleasure to read." Publishers Weekly

"This heart-breaking story of ambition, greed, jealousy, and revenge makes a good choice for fans of no-nonsense British procedurals." Booklist


There are fourteen in the DI Andy Horton mystery series, with DEAD PASSAGE, number 14 published in 2018.  I have also written number fifteen in the series, which will be published either later in 2020 or early 2021.  Meanwhile there are plenty to catch up on if you have yet dipped your toe in the water with DI Andy Horton.


Inspector Andy Horton - a man defined by a tormented past, but with hopes for his future.


The setting for the Andy Horton Crime Novels


Set against the visually strong, unique, vibrant, diverse and atmospheric backdrop of the sea in the Solent area of Portsmouth and the Isle of Wight on the South Coast of England.  Horton's investigations take him across the Solent and into the harbours of Langstone and Chichester and its surrounding coastal towns.

The Inspector Andy Horton police procedural crime series has been hailed as "exemplary," "multi-layered" "cleverly plotted" with an "especially good series hero, a likeable fellow with plenty of street smarts and the requisite personal baggage"

Join me at Hythe Library, Hampshire on  Monday 10 February  2020 for an afternoon of entertainment hearing about the secrets of successful c...