Policing and detection in the 1950s - Inspector Ryga's world

DEATH IN THE COVE is my twentieth crime novel.  It is set in 1950s England, a country still reeling from the aftermath of war with austerity and rationing biting hard. Newly promoted to detective Inspector, Ryga from Scotland Yard, is on his first solo investigation outside of London, to solve the mystery of why a man in a pin-striped suit is found murdered in an isolated cove on the Island of Portland in Dorset.


The 1950s is a fascinating period. Society and policing in the 1950s was vastly different to today, no mobile phones, no dashing about in high speed cars and no computers so it was extremely interesting to research and write.

Communicating with the police and reporting in

There were, of course, no mobile phones in 1950 and indeed few households had telephones. Mackenzie Trench Police Boxes appeared in London in 1929 and could also be used by the general public. They were a vital communications link. The boxes could be used to report fire, or to summon an ambulance and report crime.

The light on top of a police box illuminated red and could be activated by the station or by a member of the public to attract a police officer. Officers therefore were encouraged to stay within line-of-sight of their Police Box for as much time as possible, although the top of the Police Box lamp contained a gong mechanism which also provided an audible means of attracting attention.

Women in the police force

In 1932 Lilian Wyles was appointed the first woman Chief Inspector in the police force. She joined London's Metropolitan Police in 1919 and the Criminal Investigations Department (CID) in 1933.

In 1950 women police officers were still fairly rare but a growing number. It wasn't until 1948 that the first two policewomen in the Glamorgan Constabulary, WPC1 Elsie Baldwin and WPC 2 Florence Knight, were appointed on the 13th March. And Liverpool City Police only appointed police women in 1948 (Rawlings, 2002: 199).


In rural areas this often only consisted of a ‘Bobby on a bicycle’ but in towns and larger areas police vehicles were used. In the 1930s the Met was using Area Wireless Cars’ crewed by CID officers and trained drivers and operators (you can see these in operation in some British films of the period). In more rural areas motor patrols would arrive at a phone box at a fixed time and check in. By the end of the 1940s car fleets began to expand equipped with VHF wireless but not all had them, not in fact until the mid-1960s.

A very different time and way of policing from today and a joy to research and write about.

DEATH IN THE COVE is published in paperback, ebook, Amazon Kindle, Kobo and as an audio book on audible 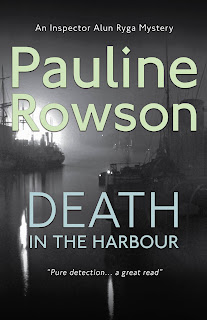