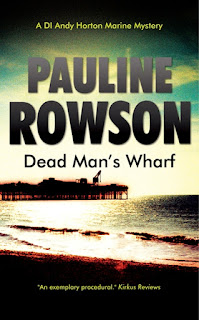 TV diving personality Nicholas Farnsworth's life is threatened. A deranged elderly lady in a nursing home claims she's been attacked by an intruder. A mother's conviction that her son's death on Christmas Eve was no accident...are the incidents related? Horton believes not but soon he's forced to consider otherwise and finds himself caught up in a complex investigation with far-reaching international implications.

'Rowson turns out an exemplary procedural with the requisite plot twists, double-crosses and all loose ends tied up neatly in a sailor’s knot.' Starred Review Kirkus (USA)


The inspiration behind DEAD MAN'S WHARF, number four in the DI Horton series of fourteen

There are two wharves close to where I live, Kendall’s Wharf and Bedhampton Wharf both fronting on to Langstone Harbour, which is on the eastern side of the coastal city of Portsmouth. Both wharves deal in shingle and gravel extracted from the sea bed which is then delivered to the wharves and I often see the ships sail up the harbour on the high tide to unload their cargo. This shingle is then used in property and road building. Kendalls Wharf in Portsmouth was the inspiration behind the Inspector Andy Horton crime novel DEAD MAN'S WHARF.

Without giving away the plot of Dead Man’s Wharf I wondered if I could have a body found there. I contacted Kendall’s Wharf who were kind enough to spare me the time to explain their operations and show me around. From that visit came further ideas for the plot line.

Dead Man’s Wharf doesn’t start with the discovery of a body though.

The story begins in January when Inspector Andy Horton and Sergeant Barney Cantelli are detailed to investigate a series of threatening telephone calls being made to a TV personality who fronts a popular television series called ‘Wrecks Around Britain’. Horton is convinced it is a publicity stunt and is annoyed that their time is being wasted when their workload is so heavy.

Then he and Cantelli are called to a nursing home where the relative of an elderly lady suffering from dementia claims she has been attacked in the night. This time Horton is not so sure this is a case of dementia-driven delusions especially when he discovers that the elderly lady’s room-mate has died. Furthermore there is a link to her son’s recent death in prison.

As if that isn't enough Horton is troubled by a mother's distressed insistence that her son’s fatal car accident on Christmas Eve was not an accident.

It’s difficult to explain where all the threads of this crime novel came from (or indeed any of my crime novels come to that) but I start with an idea usually a location – the wharf in this instance – and begin to ask myself questions: how does it feature in this crime novel? Is a body found there? If so whose? How did it get there? Why was he/she killed? What other pressing cases does Horton have to investigate? Are they linked or any they separate?

Then there is the matter of Horton’s personal and professional life. Horton is still reeling from the startling discovery (The Suffocating Sea #3) that the disappearance of his mother, Jennifer, thirty years ago was not as he thought, a single mother abandoning her child because she didn’t want a kid in tow, but could be linked to an international criminal.

Not only is Horton trying to establish what happened to Jennifer but he is also newly separated from his wife, Catherine, who is determined to prevent him from having access to their eight year old daughter.

And to cap it all Horton has a new boss, the overly ambitious Detective Chief Inspector Lorraine Bliss who has been catapulted into CID from another division. It is clear that Bliss and Horton will never see eye to eye on policing and other matters.

This crime novel like my others is multi-layered and soon Horton is drawn into a complex investigation that holds danger for him and Cantelli.

Available in paperback, as an ebook, on Amazon Kindle and Kobo and as an unabridged audio book. It can also be loaned from public libraries.