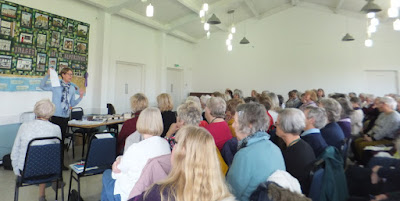 I was delighted to entertain over eighty members of  Alverstoke Women's Institute on Tuesday 3 March 2020 with a talk about the inspiration behind my mystery crime novels set on the South Coast of England.

I explained how locations along the south coast of England provide the inspiration for my crime novels and how I turn these ideas into multi-layered and gripping plots. I also talked about developing plot lines by creating a storyboard; characters using spidergrams and how I research the police procedure and the forensic aspects. 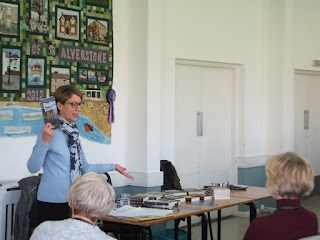 I talked about my crime busting fictional heroes, the flawed and rugged Portsmouth copper DI Andy Horton, (14); my undercover investigator, Art Marvik a former Royal Marine Commando (3); my two standalone thrillers IN COLD DAYLIGHT and IN FOR THE KILL and my new 1950 set mystery series in which the first, published in September 2019, DEATH IN THE COVE introduces Inspector Alun Ryga. 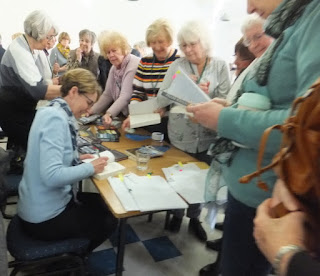 Following my talk there was a lively question and answer session and a book signing. 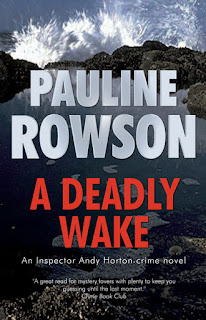 A DEADLY WAKE, number 15 in the Inspector Andy Horton mystery series is published in paperback, as an e book, and on Kindle and Kobo on 2 June 2020.


Deadly Wake is available for pre-order.


As DI Andy Horton follows the trail of a man found dead in a log cabin on the Isle of Wight, he uncovers some startling revelations into his own mother’s past and the truth behind her disappearance over thirty years ago.

DEATH IN THE COVE is set on the Isle of Portland, Dorset it is published in paperback, as an e book, on Amazon Kindle and on Kobo and as an audio book.


Death in the Cove, an Inspector Alun Ryga 1950 mystery England 1950, a country still struggling to come to terms with peace in the grip of austerity and rationing.

When the body of a man dressed in a pinstriped suit is discovered by war photographer, Eva Paisley, in a secluded bay on Portland Island, Dorset, Inspector Alun Ryga of Scotland Yard is sent to investigate.  Recently promoted, the thoughtful, observant Ryga, is on his first solo investigation outside of London, and is keen to prove his worth. Ignoring the warnings of the local police inspector, and the Dorset Chief Constable, that his trust in Eva Paisley is misjudged, Ryga quickly realises that her observations could provide the breakthrough he needs in a complex murder investigation and the answer to the haunting circumstances that have sent the man in the pinstriped suit to his death.