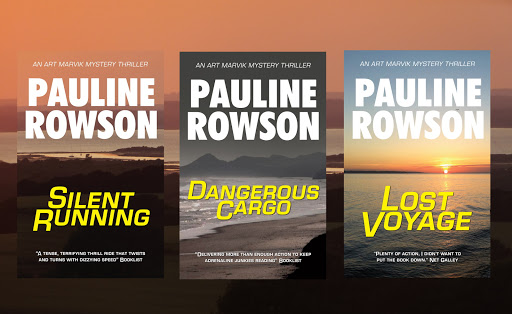 September sees the publication of my three Art Marvik mystery thrillers, SILENT RUNNING, DANGEROUS CARGO, and LOST VOYAGE.  On 14 September 2020 they will be published in paperback and e book and available on Amazon Kindle, Kobo and on Google Books and Apple Books. They were first published in hardback and I''m delighted they are being re-issued.

"Fans of Rowson’s DI Andy Horton books will be delighted with her new series featuring former marine commando Art Marvik. A tense, terrifying thrill ride that twists and turns with dizzying speed, combined with a likable, smart, tough, but all too human hero, make this a cracking-good new series-action fans need Marvik on their radar." Book

You can read about each Art Marvik mystery thriller here.


Also in September I'll be featuring articles on my website about the inspiration behind each of the three Marvik mysteries and also in the absence of giving any talks because of Covid-19  I'll be taking a look back at my talks and interviews in previous years.

In addition, I am working on revisions for number three in the 1950s set Inspector Ryga mysteries and on the first draft of DI Andy Horton number sixteen both of which I hope will be published in 2021.