A body tangled in fishing nets, Inspector Ryga is sent to investigate in this gripping mystery 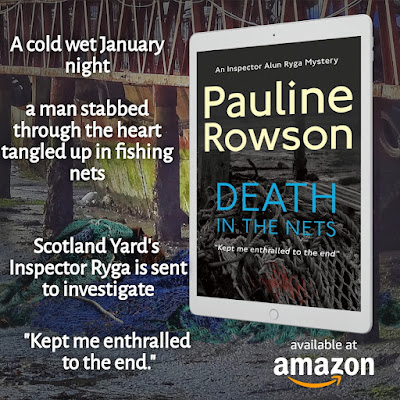 Former war photographer, Eva Paisley, insists that Scotland Yard detective, Inspector Ryga, return with her to the Devon coast where she has been staying with a friend, a former refugee from Belgium. Eva remains tight-lipped about the reason, saying only that she’s puzzled and concerned over something she has heard since arriving there a week ago. Ryga, off duty for the weekend, is only too pleased to escape London for the sea air and spend time in Eva’s company. She takes him to a house in the fishing port of Brixham where the son of her friend is adamant that he’s seen a body on the shore ‘all bashed up’. Eva claims the little boy has been talking of nothing more for a week. The boy’s mother dismisses it as an over-active imagination but Eva’s not convinced. Now the child is adamant the body he saw was on the very night of their arrival. Ryga asks the child to take them to the location, not expecting to see anything, but is stunned to find the child has been telling the truth; on the dark shore, on the wet January night is indeed the body of a man, stabbed through the heart and tangled up in fishing nets. After making some preliminary enquiries, Ryga, who has no jurisdiction to investigate, has to hand the case over to the local police. Very soon though, after a series of startling revelations, he is summoned back to Devon to discover why the dead man who left the town eleven years ago has returned and why someone hated him enough to murder him.

Wishing all my readers and visitors a very Happy Easter