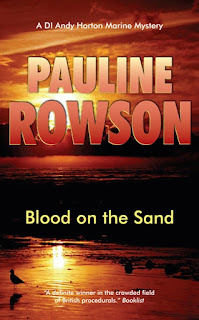 BLOOD ON THE SAND ( no. 5 in the DI Andy Horton series) opens on a cold grey January morning in Bembridge Marina on the Isle of Wight, where Andy Horton has decided to put in on his small yacht. It's hardly the sailing season but after a difficult Christmas - his first spent apart from his young daughter, Emma - and following some tough criminal investigations, Horton, has decided to take a few days break. He also needs time to think through the startling revelations he's uncovered about his mother's disappearance thirty years ago.

Until two months ago he'd always believed his mother, Jennifer, had abandoned him because she'd grown tired of having a young kid in tow. During an investigation into the discovery of a body on a burning boat (THE SUFFOCATING SEA no. 3) he learns that this might not necessarily be so. Then the death of an elderly lady in a nursing home (DEAD MAN'S WHARF no. 4) throws up more revelations and a link to Jennifer's disappearance. Andy needs to consider how important this is to him, should he pursue his own personal investigation into Jennifer's disappearance or leave it in the past?

Sailing helps him to think but he barely gets the time to do so when walking across the abandoned golf course on the Duver near Bembridge Marina he finds himself facing a distraught young woman with a gun in her hand leaning over a corpse in one of the discarded bunkers.


When Thea Carlsson professes to be the dead man’s sister and psychic, Horton’s old adversary, DCI Birch of the Isle of Wight's Criminal Investigation Department, is convinced she is mentally disturbed and the killer, but Horton is not so sure. He finds himself drawn to Thea, perhaps because he recognizes someone who, like him, is haunted by their past.

Although he dismisses her psychic powers he nevertheless feels the presence of his mother on the island. He tells himself that can be explained by a vague memory of going there with her as a child, (it is five miles across the Solent from their home town on Portsmouth) but it can't explain how when with Thea he feels close to Jennifer as though she is trying to tell him something through her. Perhaps that is wishful thinking on his part.


While investigating the murder of Thea's brother, Horton also has some personal problems to deal with, such as trying to get access to his eight year old daughter, Emma, despite his estranged wife, Catherine's attempts to prevent him.

As the murder investigation in BLOOD ON THE SAND unfolds, Horton finds himself deep in a web of intrigue that has its roots in the past.

'Another solid entry in a consistently well written series. Like Ed McBain, Rowson works many subtle variations on the procedural formula (including very interesting relationships between Andy and a couple of his superiors). A definite winner in the crowded field of British procedurals.' Booklist


Blood on the Sand is available in paperback and as an ebook, on Amazon Kindle and on Kobo. It is also available as an unabridged audio book narrated by Gordon Griffin.

Join me at Hythe Library, Hampshire on  Monday 10 February  2020 for an afternoon of entertainment hearing about the secrets of successful c...